© Diana Nowak, 2010-2021. Unauthorized use and/or duplication of this material without express and written permission from this blog’s author and/or owner is strictly prohibited. Excerpts and links may be used, provided that full and clear credit is given to Diana Nowak with appropriate and specific direction to the original content.

This week I wanted to write about Robert Vickrey, one of my favorite [magical] realists, for two reasons. My initial reasoning was based on my encounter with Cody Erickson‘s Kairos that currently hangs at the DeVos Place Convention Center downtown for ArtPrize. This 2-D submission stirred in me an inexplicable feeling of both calm and dread, a feeling that was not unlike that which I had felt upon first discovering Vickrey’s work. My second reason follows suit, as my perception of Magical Realism is very enlightening and very unnerving. But always will this genre be a favorite of mine, coming in close second to Surrealism.

There is much to say of this movement, from its birth in Weimar Germany to its sudden, temporary halt during The Great Depression. You can read more about the subject HERE. But I do believe, very much so, that despite the great artwork of Jared French and Paul Cadmus, Vickrey did it best.

A master of egg tempera from Yale University, Robert Vickrey has moved the masses with his paintings and small-scale films (a true treasure if you can find one. I suggest The Texture of Decay, which is the first of his six films and also happens to share the name of his first oil-on-canvas at show). From his Time Magazine covers to his Greenwich Village pieces bought by The Whitney are all spectacular, if even “spectacular” could justifiably describe his work.

Influenced by Titian, Goya and Rembrandt after visiting NYC’s The Met and The Frick, Vickrey paints a vivid picture of his childhood with these artists’ brilliant techniques (Vickrey, Robert. Artist at Work: Watson-Guptill, 1979. Print). Wanting to be his generation’s Norman Rockwell was plausible, but attempting to surpass the achievements of the most famous illustrator of American Culture would’ve been a forlorn goal. Instead Vickrey brought to the table an acute awareness of unpredictability in daily life, which many post-WWII Americans needed in the face of their monotonous and rigorous schedules.

In his book, Artist at Work, Vickrey entertains the idea of strong psychological overtones in his paintings. He also admits to exaggerating about 10% of reality which aids his audiences in believing his work to be “occasionally bizarre.” Thus I will never forget the first time I saw The Labyrinth at the Grand Rapids Art Museum in the winter of 2012. Words cannot exemplify the emotion that overcame me upon taking that enormous masterpiece in. And still, to this day, it is my favorite painting in existence. 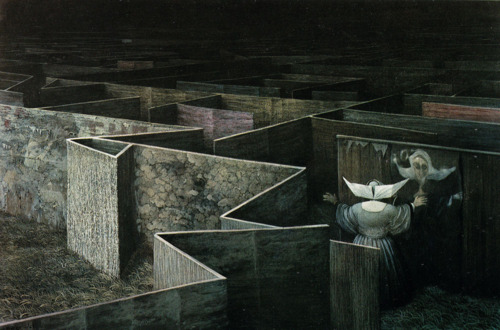 I hope new and returning readers have discovered the catalyst here in researching different art movements. Studying both the classics and the artists who have paved the way for us is vital, for it is through our understanding of them that we might transform our own art forms. And then, perhaps, will our capacity for experimenting and exploring widen. Because, as Neil Gaiman says, “Go and make interesting mistakes, make amazing mistakes, make glorious and fantastic mistakes. Break rules. Leave the world more interesting for your being here. Make. Good. Art.”